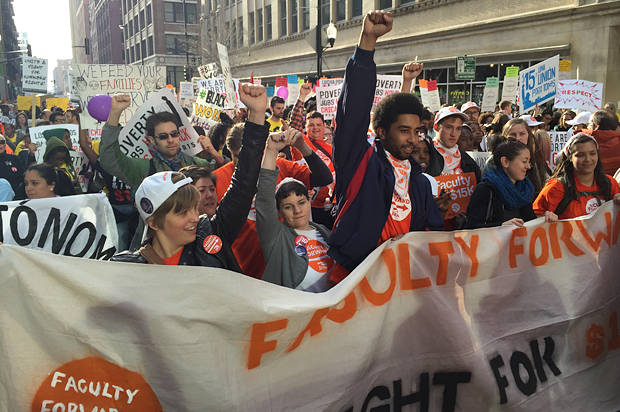 Fed up with a higher education system that prioritizes profits above all else, students and faculty are fighting back against exploitation in universities across the country. From Salon:
“Per-course pay for adjunct faculty averages around $2,800. Three courses is typically considered full-time. Trevithick is teaching six. At the average rate, if he did that in both spring and fall — the equivalent of working 80 hours a week, 10 months of the year — he’d make less than $34,000 pre-tax. And that’s at the high end: According to a 2014 congressional report, the median salary for an adjunct was $22,041.
This exploitation of low-wage faculty is part of what’s known as the corporatization of higher education. Increasingly, both public and private colleges are being run on the cost-cutting model of American business. Which presents a burning question: If faculty are being paid less, class sizes are growing and tuition is higher than ever, where is the money going?”
Head over to Salon for the full article.

The Plight of The Adjunct Professor

Houses, Cars, and Massive Bonuses: The Perks of Being a University Executiv...
Scroll to top